A few weeks ago, we started Power Lunch with Margaux Salcedo, an online show for ManilaSpeak.com, aired on Youtube.

It’s an effort of mine to bring my two worlds together: food and politics. I realized that my friendships are so diverse: that the beliefs of my friends stretch politically from left to right, from activists to bureaucrats, from the administration to the opposition to the media; religion-wise from Muslims, Catholics, born-again Christians, Buddhists to atheists; even culturally, from art collectors to pop culture enthusiasts. If there was a dish to describe my friends, it would be halo-halo.

But there is a common thread for all of them: They all love food.

So I thought, instead of eating alone when on food ventures, why not have a grand time sharing calories with my kick-ass friends in a setting that allows us to talk about current events while enjoying each others’ companies through delicious food?

And I have been on a roll discovering very interesting things about people I admire.

For example, I learned from Tourism Secretary Bernadette Romulo-Puyat, one of the first persons I had a Power Lunch with, that President Duterte loves durian and doesn’t mind at all eating sardines. (Watch my Power Lunch with Sec. Berna Puyat AT THIS LINK.)

Meanwhile, Berna herself does not eat any kind of seafood at all, even if she is constantly promoting all kinds of Filipino food. She is allergic. If she must eat fish, it has to be incredibly fresh.

Budget Secretary Benjamin Diokno, with whom I had Power Lunch this week (that episode goes live on Sunday in ManilaSpeak.com), like the President, also loves Filipino food but pairs his kare-kare with a good merlot. That is, if he has a chance to eat—he hardly eats! He has been working so hard, he forgets to eat. Proof: Our Power Lunch was a very, very late lunch, at 5:00 p.m. (more like happy hour) and his last meal was breakfast at 6:00 a.m. (Watch my Power Lunch with Sec. Ben Diokno at THIS LINK.)

When he was younger, though, he and his fellow University of the Philippines (UP) professors would drive all the way to Batangas from the Diliman campus during lunch break just to have bulalo. “We would leave UP at 11:30 a.m. and be back by 2 p.m.,” he reminisced. “Kaya pala kayo matalino, mahilig kayo kumain ng utak (That is probably why you are all intelligent, you eat marrow),” I said.

Former Sen. Rene Saguisag, whose Power Lunch episode went live last Sunday, cannot eat a heavy dinner. He will go for just tapas and cheese or just pica pica. That is because he still goes dancing after. “I need it as my exercise!” he confides. (Watch my Power Lunch with Senator Rene Saguisag AT THIS LINK.) 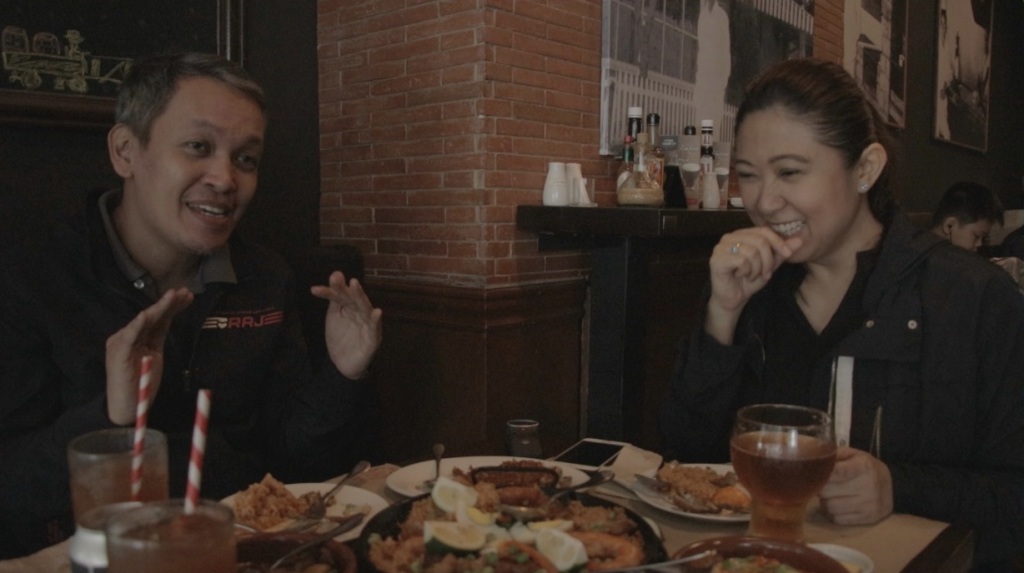 Renato Reyes Jr. of Bayan, whom I had the privilege of having a Power Lunch with before the President’s State of the Nation Address (and the House Speakership power grab), also loves a good steak. (Didn’t I tell you my friends range from right to left, from admin to opposition?) But more importantly, he also knows where to get a good sisig. He strongly recommended the sisig at Casa Marcos in Quezon City, which we fortunately caught on their last day before moving to Baguio. It was spicy and good! (Watch my Power Lunch with Nato AT THIS LINK.)

The biggest revelation so far, however, has been that of luxury car distributor Willie Soong, president and CEO of Autostrada Motore, better known as the distributor of Ferrari and Maserati. Everybody knows him for his cars and that was how I knew him too, because I met him when he led 25 Ferrari owners to Baguio, driving their Ferraris, for the brand’s anniversary.But I did not know—because I only met him last year at this event at the Manor in Camp John Hay (and also because I am so young—hahaha!)—that he also created Racks. Yes, that Racks with its famous fall-off-the-bone baby back ribs.

I found out at our Power Lunch that not only was he the owner but also the creator and “chef” of Racks. He personally developed the ribs recipe as well as each signature sauce.

Over our Power Lunch at James & Daughters of Chef Jonas Ng at the Fort, he shared he quietly celebrated the 25th anniversary of Racks with the original team just a few months ago, although he has already given the Philippine rights to the Prieto family.

He also shared the ups and downs of owning and managing a restaurant business before the turn of the century.

Funny enough, one of the highlights of his Racks days was when the Department of Tourism in 1994 asked him to host a lunch for all the Miss Universe contestants at the Malate branch. The sponsorship was worth it because after lunch, each of the contestants gave him a kiss. The last kiss of course was from his own Miss Universe—his wife.This Power Lunch online show is so much fun for me, discovering the life story of each of the personalities, who are movers and shakers in their own ways, all making a difference in the country and in the world. Even if most of them are already my friends to begin with, the show gives me an opportunity to find out details about them I never knew.

It’s also even more fun because I insisted the third character must be the restaurant. We also get to know the chef or the restaurant’s signature dishes over our lunch.

My latest discovery is that chef Jonas, aside from cooking great Asian food, makes a mean langka ice cream. Try it at James & Daughters.

I hope, in time, Power Lunch becomes as much fun for the viewers, too. Please join us for lunch today. Visit manilaspeak.com or search Power Lunch with Margaux Salcedo to find the ManilaSpeak channel on Youtube. 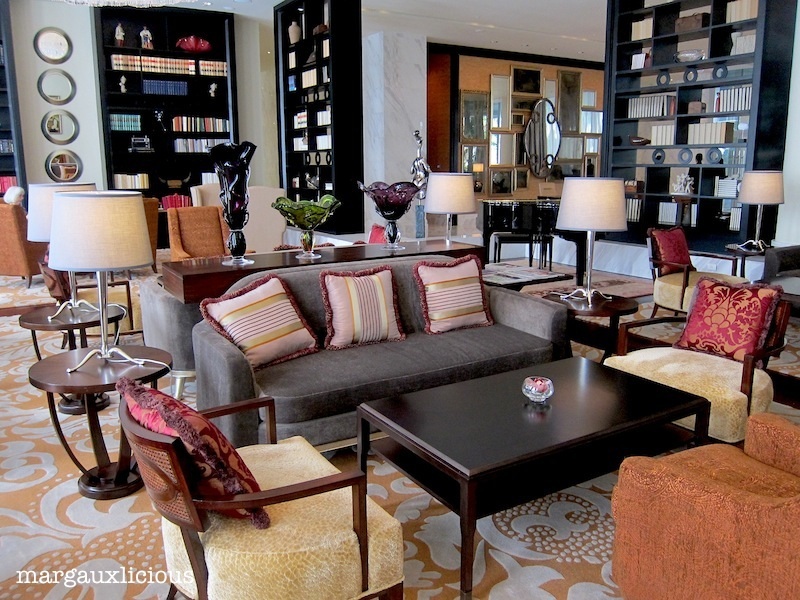 One of the highlights of 2012 for me was staying at this chichi hotel in London called The Savoy:

“To stay at The Savoy is to follow in the footsteps of Sir Winston Churchill, Frank Sinatra, Maria Callas, Claude Monet and Katharine Hepburn.  An iconic hotel brilliantly reinvented for the 21st century where an unashamedly old fashioned glamour sparkles with a new lustre.  Perfectly positioned on the banks of the Thames, the excitement of London is waiting just beyond the world famous entrance.”

So what joy when Fairmont Raffles Hotels International opened the adjoining Fairmont and Raffles Hotels in Makati! And happily, their version of the hotel in this neck of the woods world does not disappoint.

I haven’t seen the rooms of the Fairmont, which is supposedly more for the business traveler than for the leisurely tourist. But check out this room at Raffles:

Nice and cozy. Perfect for the independent traveler.

But if you need bigger space – to entertain business guests, for the kids, or whatever other reason, there’s this suite:

Bigger than your apartment?

But it wasn’t the space that captured me. It was this:

But seriously, the attention to detail at this hotel is impeccable. From the beddings to the mother of pearl detailing on the cabinets to the art on every floor. The chair below, for example, greets you as you land on your floor. This is no ordinary chair. And I wish I knew who the artist was. Same with the birdcage-like structures that are just resting by the elevator. Meanwhile the room’s mini-bar has these mother-of-pearl accents. And while SM’s Kultura may have imitations, you know this is the kind that is defined by quality. 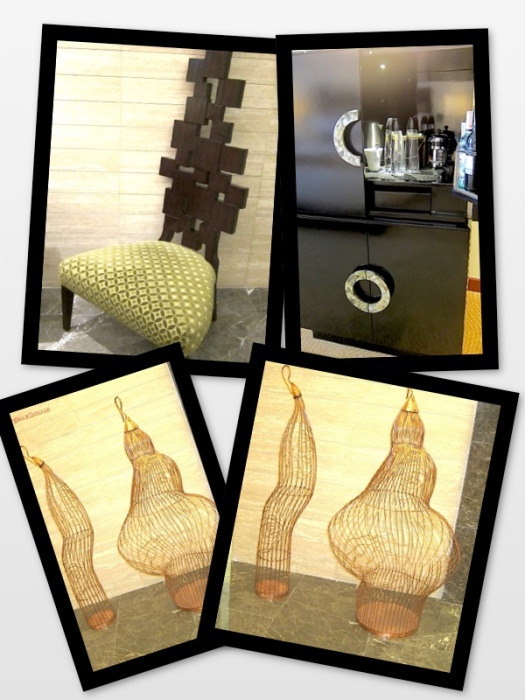 The lobby is also blessed with amazing art. Whoever the curator of Raffles is, hats off to you.

At the Writer’s Bar, they have biographical art showing musician Levi Celerio.

But the commitment to fine Filipino finds is not confined to the walls. The tribute extends to their menu!

Didier Derouet, Raffles’ Executive Pastry Chef, is French. He was born and raised just off Paris although he worked for 20 years in the United States, serving no less than former President Bill Clinton at the St. Regis in Washington DC. But he married a Filipina, a Waray at that, and moved to the Philippines, where he has fallen in love as well with our produce! He fondly recalls, “I went to my wife’s province and looking around I saw mango, bananas, passion fruit, guava. ‘You live in a fruit basket!’ I told her.” He especially loves panocha, even more than muscovado. “I brought it once to the US and made banana bread with it and it was incredible!” Thankfully, Raffles allows him to play around with these flavors. So at Cafe Macaron, the hotel’s patisserie, they serve ube macaron, calamansi guanaja, and buco pandan pralines. And the all day buffet Spectrum takes the hotel’s commitment to local produce a step further: in its center is a live beehive, with bees from Baguio a-buzzing as you pick up your glass of honey mascarpone!

Beyond dessert, instead of California maki, Spectrum also offers lechon kawali sushi and bangus belly sushi. The lechon kawali sushi will make you smile at its cleverness: as you bite into it, while in your head you are expecting something Japanese, when you start to chew, there’s no mistaking that lechon taste – it’s all Pinoy!

Meanwhile, at the other end of the hotel, there is Long Bar, a cult bar in Singapore most known for the Singapore Sling but also for the tradition of throwing peanut shelves on the floor in rebellion (rebellion na yun sa kanila) against the strict government policy prohibiting littering. In utter respect for the city they now also live in, Raffles Makati has created the Makati Luxury Sling, a sweeter, richer take on the Singapore Sling that boasts of 24K gold atop its foam (warning to purists: this is a very sweet drink!). There is also the Makati Manhattan, which uses the proudly Pinoy Don Papa Rum.

Of course luxury comes with a price. The Makati Sling is over P500 – it must be the 24K gold! But the fact that it’s available and that the hotel is even encouraging “staycations” probably means that either the rich are getting richer or maybe the economy is looking up after all!

Can’t wait for their French restaurant to open this 2013!